How does Ancestry DNA testing work?

Before, tracing your roots meant hours in the library scouring birth records and census information. Now, with ancestry DNA testing, you can discover your genealogy with just a swab from your mouth.

Differences between types of Ancestry Tests

The Basic World DNA Ancestry Test is a value-priced version of the DNA Fingerprint Plus Ancestry test. This mid-range choice is “just the facts.” Like the full product, this test examines standard locations on your whole-genome DNA used in the forensic sciences and gives you a comprehensive picture of your ancestry based on all your ancestral lines.

The time depth is historical, not ancient (200 – 500 years). The report states the investigators’ conclusion to testing up front and summarizes your principal ancestral lines in a sentence or two.

It then lists your top 50 world populations (including potentially 50 North American indigenous tribes, notably Cherokee, as well as Sephardic, Ashkenazi and other Jewish matches, Romani/Gypsy and other exotic groups).

It goes on to break out your top 20 countries of Europe (including the latest additions, Ukraine and Russia). You also receive your unique, identifying DNA fingerprint with lab results showing your 15 standard alleles.

Our exclusive, best-selling DNA Fingerprint Plus Ancestry Test examines all your ancestral lines at once, to tell you which countries and ethnic groups your ancestors came from.

In addition to your populations matches, the DNA Fingerprint Plus also tells you if your profile contains any of 18 ethnic markers. The test and ethnic panel confirm any Native American, African, Jewish, European or Asian ancestry; if you are primarily or even part European, you will also receive your top matches in our exclusive new EURO analysis, together with your Megapopulations.

Ethnic estimates by percentages are notoriously misleading which is why we offer Megapopulations Analysis, included with every DNA Fingerprint Plus Ancestry report.

Our genealogy experts take your DNA results and evaluate the relative strength and weakness of your matches to arrive at an overall picture of your primary ancestries dating back to 500 years. You will also receive a world ancestry map and certificate of testing.

The Native American version of our DNA Fingerprint Plus Ancestry Test examines all your ancestral lines at once, Native and non-Native, including European, to tell you which countries and ethnic groups your ancestors came from.The Native American tribes and population matches, markers and metapopulation frequency index confirm, within the limitations of our data:

The test and ethnic panel also detail any European, Middle Eastern, African or Asian ancestry. You receive your top matches from different European countries or parts of countries, as well.

Countries included with our Euro analysis:

The complete list of European countries or populations for which we have data is as follows:

Megapolulations are the broadest possible ancestry categories for your relative mix of ethnicities.The number rendered as Average Frequency is the statistical change of occurrence for your unique DNA profile in that megapopulation.These frequencies are based on more than 490 world populations in our databased, grouped into 22 megapopulations.Often a megapopulation corresponds to a continent-specific grouping, such as African.At other times, the megapopulation represents and emigrant or derived ethnicity, such as Jewish or Iberian American (also known as Hispanic).The largest megapopulation contains over 10,000 subjects, and the smallest has fewer than fifty, but all samples are reliable and valid.
The higher the frequency the greater the match and more likely it is you have ancestry in that megapopulation.

Who can take this test?

One of the great advantages of ancestry DNA testing is that anyone—male or female—can take this test and get answers about their genetic heritage. Before, if a woman wanted to test her father’s line, she needed a brother or uncle to take the test because it was a sex-related Y chromosome test. Thanks to advances in DNA testing technology, both men and women can take ancestry DNA tests, making it ideal if your relatives have passed away or you’re adopted. 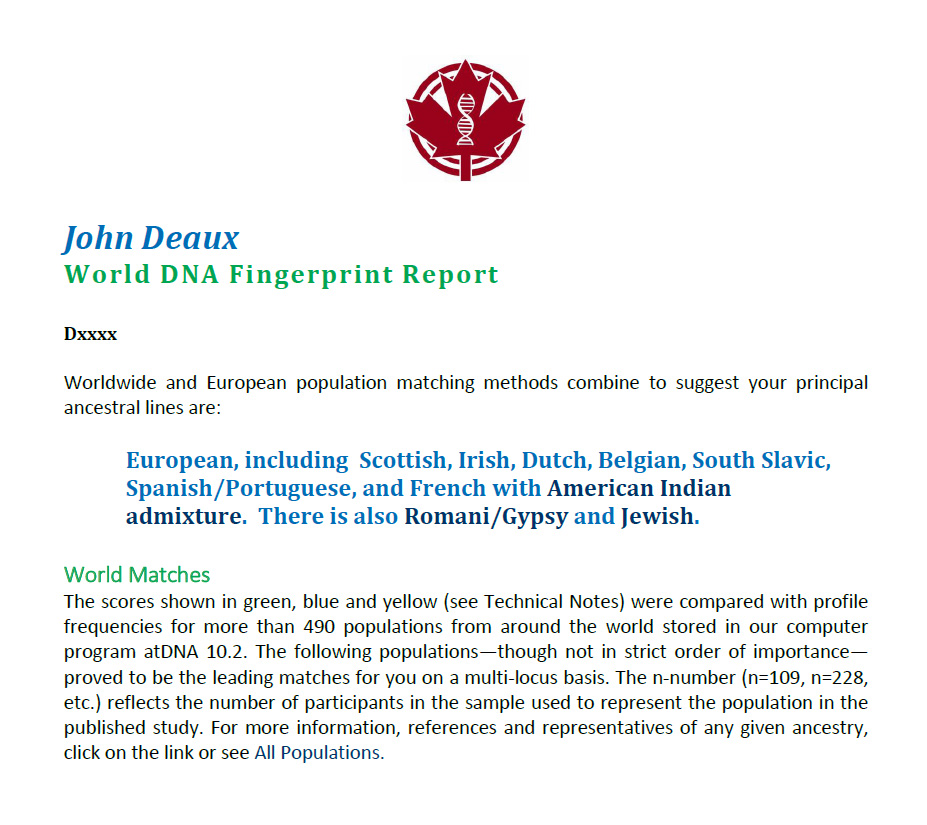 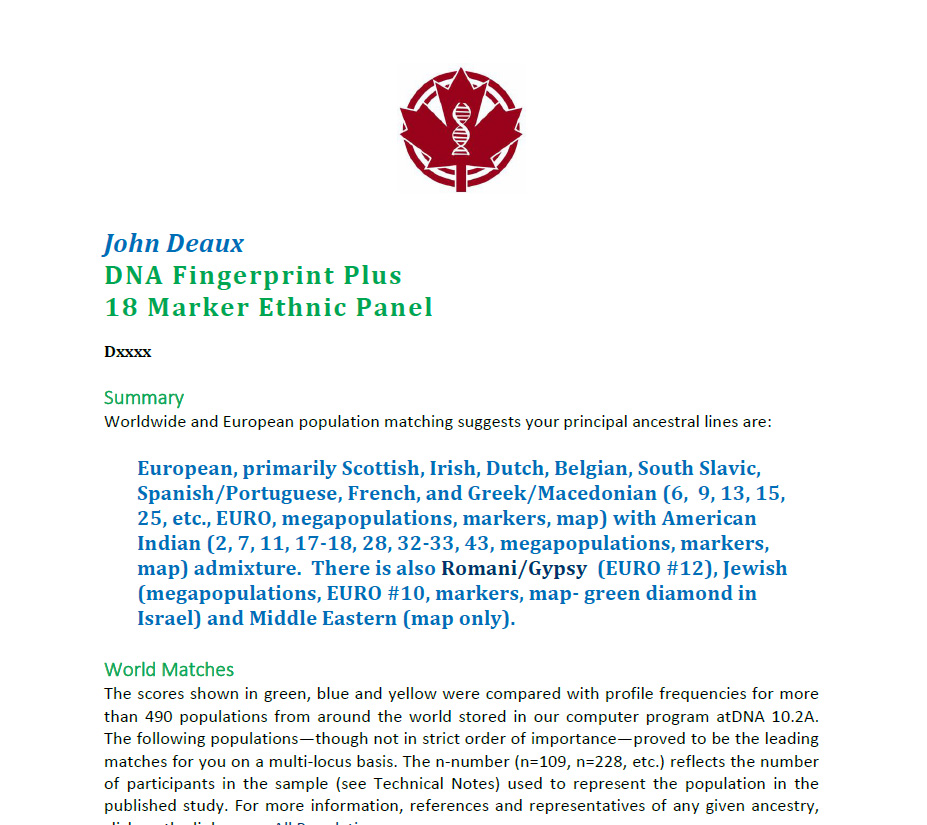 The process is easy

We send you a package with your collection kit and instructions by Canada Post free of charge, or for $35.00 you can choose to have your kit sent express with Fed Ex.

You collect a sample by rubbing four swabs inside your mouth, 2 on the right, 2 on the left and return them to us using the self addressed envelope, we suggested sending the samples back registered mail.

Your sample is analyzed according to standard STR scores, also called CODIS markers, your individual DNA profile. Your 7-page report is ready 2 to 3 weeks after we receive your samples back for testing. Results are sent out via email or mail, however you indicate on your paperwork that you will fill out and send back with your samples.

If you have further questions, please view the Frequently Asked Questions page or contact a Certified DNA Specialist toll-free at 1-877-477-5661.